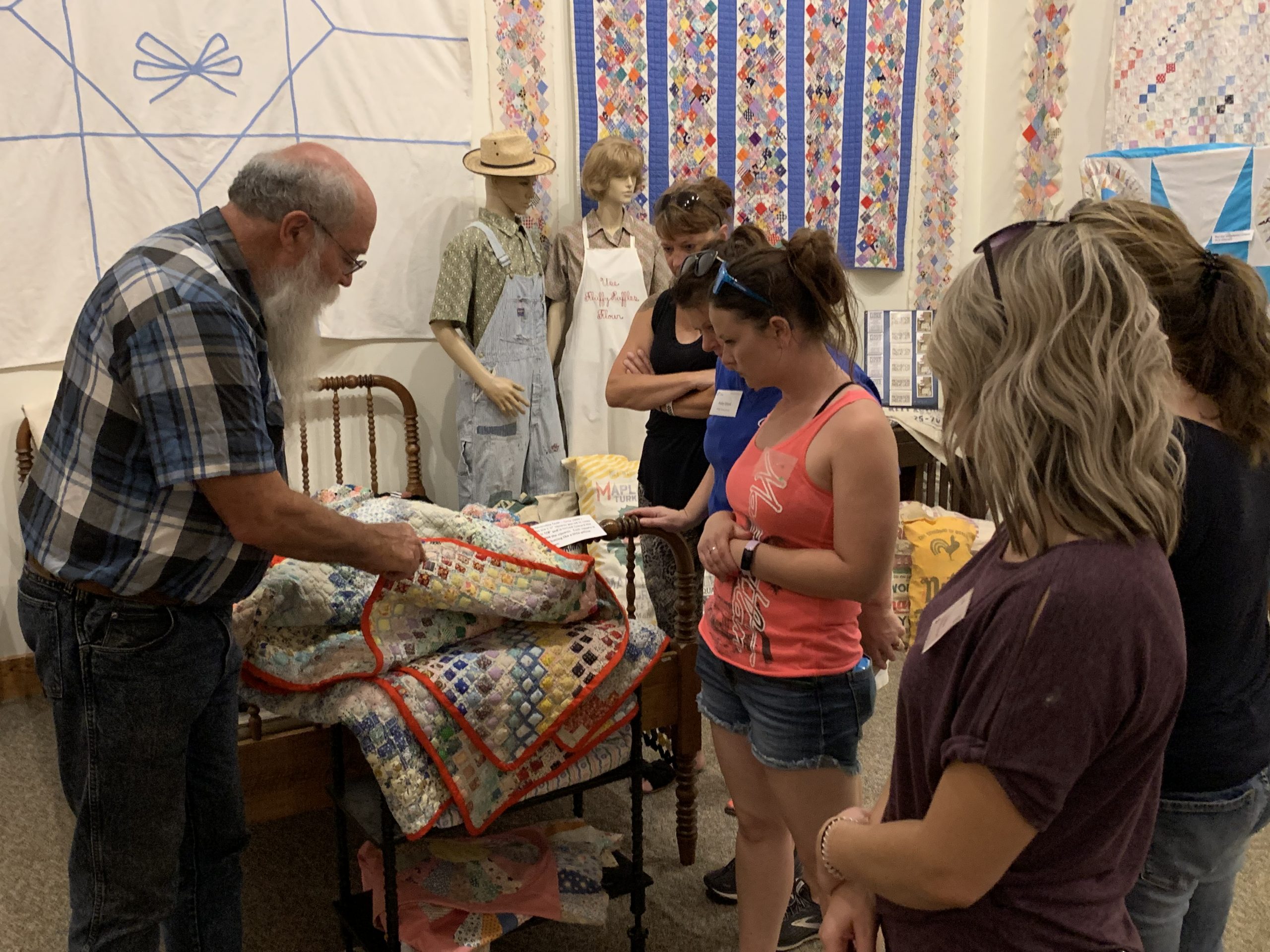 WASHINGTON–Washington historian Michael Zahs unlocked the secrets of Washington County’s past for the Leadership Washington class during the Washington Chamber of Commerce program’s County History Day held June 9. Nobody knows the history of the county like Zahs, and nobody knows how to tell its stories like this former history teacher. On the tour, two videographers captured his every word for a video which is underwritten by funds from the local Hotel Motel Tax Committee to be used for educational and tourism purposes.

Zahs revealed many facts about the county that even those who had lived here for decades did not know. Things like:

— Our current courthouse is the fifth courthouse we’ve had. The first was located in the town of Astoria which (among others) no longer exists. Then there were three located on the square before the current building was constructed in 1886. The Astoria Courthouse was the first courthouse in Iowa.

—Speaking of disappearing towns, in addition to Astoria, the tour took the group through what once was Yatton in the 1840’s, Lake, Havre, Harrisburg which was gone by the Civil War, White Ash in the 1870’s, Bethel and Haskins. And due to time restraints, the tour did not take the group to the west side of the county.

—As of this writing, Zahs has recorded 178 cemeteries in the county, most without markers.

—There was a college in Washington which started on the square, then was moved to the area near the present site of the high school. It closed during the Civil War.

—There was a brick factory in Washington and there are still some “Washington Brick” houses standing today. The houses are all painted since the bricks were soft.

—The Underground Railroad was neither underground nor a railroad. The Reformed Presbyterian Church in town and the brick house across the street were involved in helping to occasionally move slaves.

—In 1874 Washington County built a Poor Farm where people who couldn’t pay their debts were sent to work until they earned enough money to get out of debt. On December 8, 1878, a fire destroyed the building. In the late 1870’s the building was replaced with the structure that still stands on Lexington Boulevard.

—The interchange of Highways 34 and 218 in Mt. Pleasant is oddly configured. It was designed by Zahs and his son Adam who were called in to help locate any graves that might be buried in the area and construction was planned to avoid disturbing the graves.

—The intersection of highways 92 and 1 is the exact center of Washington County. It is 12 miles from that point to any border of the county.

—Apartments across the street from the Fareway store were once livery stables.

—Part of what is now the Jones Eden Funeral Home was once the Fox Movie Theater.

—Much of Washington County was swamp land in the early days. A road to Crawfordsville was built with logs and was known as a corduroy road.

—Ainsworth had four newspapers (not at the same time) and was the home of the Western Horticulturalist, a publication with worldwide circulation.

—In 1858 the railroad from Muscatine to Washington was completed. It was a very big deal. Women prepared food for thousands in the Washington square to celebrate. When the train arrived, people packed the cars to ride to Muscatine. When it got to Ainsworth, there was no room for passengers to board, making citizens in that community more than a little upset. Ainsworth residents covered the track from Ainsworth to Washington with soft soap making it impossible for the train to move on that stretch of the return journey. Passengers had to get out and wash away the soap to get home. From then on, Washingtonians always made room for Ainsworth passengers.

—Crawfordsville is the birthplace of the National Republican Party. It was founded there in 1854 in meetings at the Seceder Church and the House of All Nations.

—Pleasant Hill Christian Church is the second oldest church in Iowa, founded in 1836.

—The Amish in Kalona have been here since before Iowa was a state. There are 1,500 Amish in the area, the largest group of Amish west of Ohio. The Amish are the fastest growing ethnic group in the U.S.

—The Amish Middleburg School near Kalona is the longest running one-room schoolhouse in Iowa.

—Iowa once raised more varieties of apples than any other state.

—The Native American Indian burial ground where Zahs took the group was the only spot on earth where three cultures chose to bury their dead…around 3000, 500 and 150 years ago.

—A Presbyterian Church in Haskins bought a new piano for its congregation. At the time it was a very controversial decision to bring a musical instrument into a sanctuary. The same day the piano was brought in, the church burned to the ground that night.

According to the Chamber, if all this sounds like fun, the tour will be repeated for next year’s Leadership Washington class and there are still as few openings for that class.

The tour included a stop at the F-Troop Military Museum in Washington. Millie Youngquist was the volunteer leader on the trip.

For any questions contact Bill Monroe at the Chamber of Commerce, bill @washingtoniowa.org.