Washington’s first recorded entertainment was in 1865 when Yankee Robinson’s “Big Show” which included a circus, minstrel show, menagerie, and museum, came to town. Other early entertainments appeared in the courtroom of the county courthouse. The Town’s first space built specifically for entertainment purposes was Corrette’s Hall, located upstairs, it operated from 1866 to 1870. The second was Everson’s Opera House, also an upstairs space operated from 1868 to 1895.

Washington’s first recorded entertainment was in 1865 when Yankee Robinson’s “Big Show” which included a circus, minstrel show, menagerie, and museum, came to town. Other early entertainments appeared in the courtroom of the county courthouse. The Town’s first space built specifically for entertainment purposes was Corrette’s Hall, located upstairs, it operated from 1866 to 1870. The second was Everson’s Opera House, also an upstairs space operated from 1868 to 1895.

The First Graham Opera House, also an upstairs house, opened in 1886 and became a social center until its destruction by fire in 1892. It had twelve sets of scenery: forest, garden, landscape, horizon, mountain pass, palace, palace arch, center door parlor, prison, kitchen, and a plain chamber. At the time of the opening, the Washington Press noted: “No danger from a fire amid the sceneries for there is a water supply on the stage.” However, it burned to the ground on Nov. 23, 1892.

The Press also reported: “Our beautiful opera house, the pride of the city and a pleasure to all our people is no more, and only the backend wall and a pile of debris are left of the most imposing structure in our city. Hundreds of people watched the flames lick it up with sad hearts, but were powerless to stay their progress.”

Seventy-five electric lights were on the ceiling, the border lights were gas, footlights were both gas and electric. It had ground-floor seating, a balcony, and a gallery. In 1894, the first full year of operation it housed twenty-three professional theater productions, in addition to home talent productions, lecturers, concerts, political rallies, and the high school commencement. The opening production was Sardou’s Odette, starring Clara Morris. The newspapers reported that she was “half dead” with grippe, was in poor voice, and attended by a doctor backstage. 1,000 tickets were sold at $5.00. The chairs had not arrived, so playgoers had to sit on folding chairs. Clara Morris was a prominent actress of her day, probably the most famous to ever appear in Washington, but is almost completely forgotten today. She died in 1910, seventeen years after her performance at the Graham, blind and impoverished.

Professional companies appearing at the Graham included regional groups, as well as those out of Chicago and New York. Many companies returned repeatedly.  The most often performed production was Uncle Tom’s Cabin.  Forty-three Uncle Tom productions appeared in town from 1861 to 1930. They were mostly one-night stands, and included two tent show productions.  The Washington Evening Journal’s review of one Tom company said, in its entirety: “Eva died again last night.”

The Mikado was a favorite. The Mikado Juvenile Company boasted it had fifty of the best-known children on the Juvenile stage, none over sixteen years of age. In 1880 (at Everson’s Hall) the town hosted three productions of HMS Pinafore within six months. They included a regular professional company, the Juvenile Opera Company, and a home talent production.

Like in thousands of other towns and cities, movies were the downfall of live professional theatrical companies at the Graham. As the films became more popular, the opera houses no longer booked live productions, which cost much more than a film’s rental. It was all economics.

The Graham Opera House was sold to local businessman, Winfield Smouse in 1921 and he in turn leased it to Ralph and Clyde Pratt who also operated the Fox Theater on East Main Street here in Washington.  The Graham was closed for a time in the 1920s, In 1928, it reopened as a movie theater and opera house combination. The interior was remolded in 1931 and reopened as the State Theater, by then there were virtually no professional company using the opera house. It did however, occasionally house local talent productions until a newer screen and sound system made the stage unusable.

In 1940, the Pratts installed push-back seats (the first in Iowa) and air conditioning. In the 1970s the exterior was “improved” adding a new brick façade to the lower level, and a tin front to the upper levels. The building changed hands several more times until it was purchased by Fridley Theatres in 2001.

On November 17, 2010 a fire broke out in the upstairs projection room.  Fortunately, the fire was put out quickly and fire damage was confined to that single room.  However, the rest of the building sustained smoke and water damage.  The theater was closed while the interior was renovated and restored.  Larger, more comfortable seats were installed and the restrooms were improved.  A Gala Reopening Ceremony took place on April 30, 2011 and patrons were again able to view movies on the silver screen in Washington.  A fundraiser was held in conjunction with the reopening and these funds were used in towards the renovation project.

On May 22, 2013 the Graham Opera House was listed on the National Register of Historic Places as a part of the Washington Downtown Historical District.  As a result of this designation, Fridley Theatres applied for and was accepted for historical tax credit programs at both the state and federal level.  The exterior renovation was completed in 2014 and reflects the theatre’s appearance in 1942.

Through the years, many prominent townspeople were associated with the Graham, but none more interesting than Frank and Indiana Brinton. Frank and Indiana were both from rural Washington County, Gracehill and Verdi, respectively.  Frank, as his father before him, farmed, traveled the world, and patented a number of inventions.

Repeated and lengthy trips to the Holy Land led to Frank presenting illustrated lectures in churches and public halls around the Midwest beginning about 1880. They traveled on the Chautauqua circuit displaying magic lantern shows of the holy lands, accompanied by models wearing native costumes. In 1895, The Press reported, “He has a vast new lot of views that he will throw on the screen in the Graham”.  As early as 1895, Frank moved from magic lantern slides to motion pictures.  Frank and Indiana showed the first films ever to be seen in the Opera House.

In 1899, The Press reported “He has vastly improved his show, adding many new moving pictures, as the destruction of Cervera’s fleet, the dynamite cruiser “Vesuvius” in action, Spanish artillery ditto, rough riders swimming horses across the river, cavalry charging, street scene in Jerusalem with Arabs, beggars, peddlers passing; beheading of Mary Queen of Scots etc. The sounds of the motions will be given, which make them still more natural. Admission 10, 15 and 25c.”

Indiana became part of the programs after their marriage in 1898.  She did not perform, but did organizational work and mostly just “looked pretty.”  The Brintons traveled on their own and also as a part of the Red Path Chautauqua circuit.  They were always based in Washington, even though they traveled much of the western United States.

Mr. Brinton often included his passion for flight with his programs.  He began working with flight in 1890 and sometimes flew models during his programs.  Had it not been for the jealousy of a local hardware merchant, Brinton would have likely had a manned flight four years before the Wright Brothers. But that is another story.

By 1905 the Brintons had given over fifty shows at the Graham. They served as managers of the theater from 1905 until shortly before his death in 1919. After Frank’s death, Indiana continued traveling and working in land speculation until her death in 1955.  At this time the executor of her estate moved many things connected with the Brinton Entertaining Company to his home. In 1981, Michael Zahs purchased the collection.

In 1981 part of the film collection was sent to the Library of Congress for correct storage.  The films were stored, but not cataloged. 16mm copies of the films were made and returned to Michael Zahs.  All Brinton films have now been digitized and/or reproduced on safety film for safe viewing. Other than the 1905 moving picture projector, nothing in the Brinton collection has been restored.  Things have been cleaned and digitized, but not restored.

Brinton Extravaganza and Guinness Designation - May 2016

The “Brinton Extravaganza” was staged on May 1 and 2, 2016 at the Graham Opera House/State Theatre as part of the documentary.  As much as possible the Extravaganza was like a Brinton show of over 100 years ago.  There was singing, song slides, speaking, 35 mm Brinton moving pictures shown with the restored 1905 hand crank projector, magic lantern slides, airship model and live music by the Red Cedar Chamber Music ensemble.

Full houses enjoyed the show and watched as the Guinness World Record representative presented the official certificate recognizing the Graham/State Theatre as the “Oldest Continuously Operating Movie Theater in the World”, having shown moving pictures since 1897.  Since the award, it has been found that moving pictures have actually been shown at the Graham/State since 1986.

John Richard, Andrew Sherburne, and Tommy Haines, film documentarians from Iowa City began filming the Brinton story in 2013.  This led to the production of the feature length documentary, “Saving Brinton” in 2017. 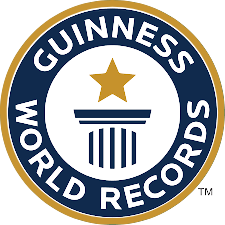 Thank you Sarah Grunewaldt for designing our mural. The design depicts Frank Brinton’s original Acetylene Powered Projector with Frank and Indiana Brinton against the interior of the theatre as it can be viewed today.

Our State Theatre is constantly showing a variety of movies. Be sure to check out what is playing today by clicking the button above!

Welcome to Washington
Go to Top
Change Location
To find awesome listings near you!